Bucky Fuller and the Urbee 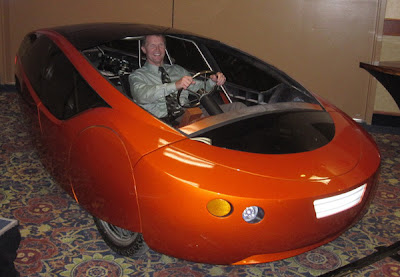 The Urbee hybrid two-seater car has had a lot of media hype lately, largely because its body is manufactured using 3D printing (rapid prototyping). But its claims of high efficiency are due to the compactness and low aerodynamic drag of its body and its light weight. What is of interest here is the car uses a three-wheel chassis. The two front wheels are driven and the single-rear wheel does the steering. 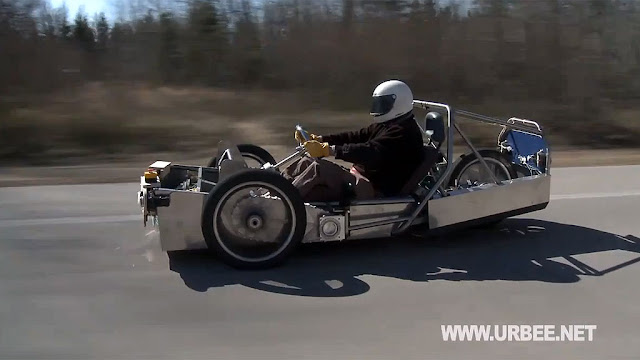 This layout has some significant advantages that allow for a car with a narrow cross-section. Since the two front wheels do not turn, the width of the vehicle can be minimized.  It is only made up of the width of the two passengers and the two narrow wheels. The extra volume required for steering the rear wheel easily fits within the frontal width and allows the vehicle to be tapered for better aerodynamics. Contrast this layout with the wheels-on-pontoons approach of the Very Light Car (see “Back to the Future” below). If the steering allows the rear wheel to turn perpendicular to the front wheels, the vehicle can make extremely tight turns, having a turning radius little more than the vehicle’s wheelbase.
Of course the most famous use of this wheel configuration was Richard Buckminster (Bucky) Fuller’s Dymaxion car of 1933. 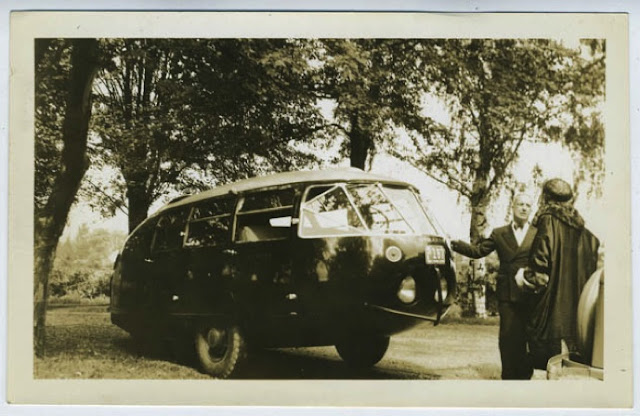 Fuller didn’t arrive at this layout arbitrarily. He was trying to design an omnidirectional transport that could be used on land, in the water and in the air. As a result the wheel layout was identical to the tail-dragger approach common in aircraft of the day. Fuller envisioned that at high speed the rear wheel would lift off the ground and steering would be controlled by means other than the rear wheel. The body was intended to be essentially horizontal in this state and, as a result, the body has an upward-forward slant in its layout. 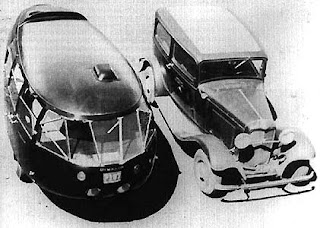 You see, rear-steering tricycles are inherently unstable. If the rear wheel is given positive castor (see “The New Balance” below) then during turns, the radial acceleration forces will cause the turn to tighten. This positive-feedback effect will cause a “ground loop” which will eventually cause the vehicle to overturn. This is the reason that there are no longer any pivoting tailwheel aircraft. Contrast this with a front steerer where taking ones hands off the wheel causes the turn to be reduced. If the wheel is given negative castor, the ground loop problem is eliminated but the vehicle won’t run straight will hands off the steering.
The typical design approach to remedy these problems is to make the steering kinematically neutral and provide a secondary means to cause the steered wheel to straighten when hands are off the steering. 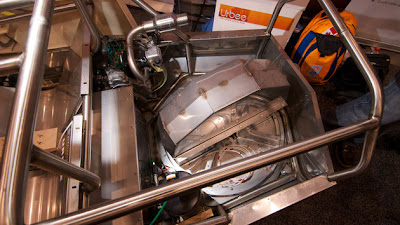 The Urbee’s rear wheel is located in the center of a horizontal bearing with the rolling elements located outboard of the wheel. This approach is kinematically neutral but the mechanism to cause the wheel to self-center is unclear. The Urbee engineers feel that they have eliminated any stability issues with this design. Their approach appears to allow for 90 degrees of steering angle. 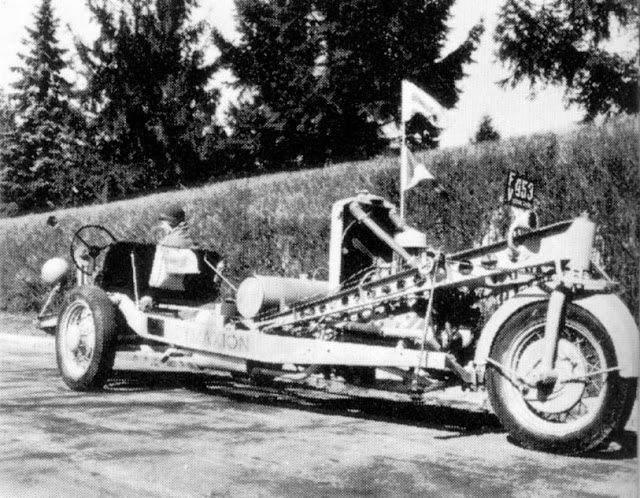 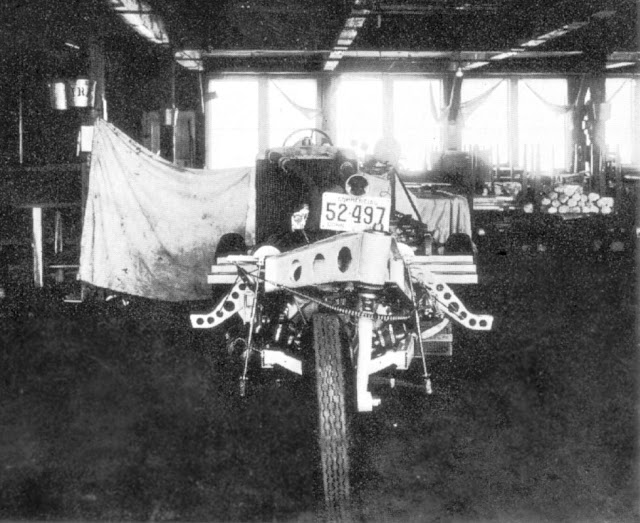 The Dymaxion car used a near-vertical single-bladed steering fork whose axis intersected the ground within the contact patch of the tire, essentially resulting in near-zero castor.  Notice between the two versions shown, the side the fork was on has been reversed and notice the fork is raked from side-to-side in addition to front-to-back.

Of course this three-wheel configuration has been used numerous times. I have used it twice. The first time was for the University of Wisconsin’s entry to the 1979 SCORE (Student Competition on Relevant Engineering) Energy Efficient Vehicle Competition. The entry of a pedal-assist small-gas engine three-wheeler into a field of automobile-type vehicles was the brain-child of the late-great Prof. Ali A. Seireg. Prof. Seireg was a bit of a showman and he realized that to get the media to notice our entry, we needed to present an unconventional approach. Prof. Seireg did make the right call. Time Magazine’s coverage of the event had pictures of only two vehicles, and the UW runabout was one of them.
Despite how technically tantalizing this vehicle layout is, I have to question the wisdom of using it for mass-produced consumer vehicles, thought it may be acceptable for experimental vehicles, record-setting vehicles and military vehicles. Even though the stability problem may be addressed, any litigation involving a crash of the vehicle is bound to raise the issue of its unconventional steering. How do you counter the prosecution’s expert-witness’s first utterance that “Everyone knows a rear-wheel-steered vehicle is unstable”?