Arm-Power and the Avatar Recumbent

For short term, anaerobic, activities the energy available for physical activities is related to how much muscle mass can be recruited for the activity. The limitations imposed by the cardio-pulmonary system do not apply. During long term, aerobic, activities the rate of oxygen delivery to the muscles is the limiting factor in how much power an athlete can produce.
Back in the day, (prior to the HPV movement in the mid-1970s) the reining wisdom was that a cyclists employed enough muscle mass with their legs while pedaling to utilize all the oxygen the cardio-pulmonary system could deliver. Nothing would be gained by adding more muscle groups in propelling the bicycle. I strongly suspect that this idea came out of the ban of unconventional bicycles that was initiated by the Union Cyclist International in the 1930s and was not based on empirical data.
In the second edition of their book, “Textbook of Work Physiology”, Astrand & Rodahl do a literature study comparing the maximum oxygen consumption (Vo2 max) of various activities. If running uphill is scaled at 100%, horizontal running is between 95-100%, upright cycling is 92-96%, supine cycling is 82-85% and arm and leg cranking (where the load on the arms is 10-20% of the total load) is 100%. The above data must be taken with a grain of salt since it is a compilation of different tests. It does serve my purpose though, and that is to indicate that more power can be obtained by adding arm power to leg power, especially for pedaling in the recumbent position.
A major advantage to adding arm power to a recumbent is that the arms are not as involved in postural support as with an upright bike, and therefore can perform the task of propulsion while the rider remains stably mounted on the machine.
In the post “Rx for a Healthy Commute” I extol the comfort I experienced in riding an Avatar 2000 recumbent over a period of 22 years. What I didn’t mention was I never obtained upright-bicycle speeds while riding it. I attributed my lack of power to coming from a runner’s background, where more of the leg force came from the gluteus and hamstring muscles as opposed to the quadriceps muscles. I suspected that sitting on the major force generators significantly reduced my supine power output, but again I have no empirical data to substantiate this notion. On the other hand, I estimate that my recumbent speed was only about 80% that of my upright speed. This would equate to a drastic loss of power!
The bottom line, though, was I always felt I had cardio-pulmonary capacity I wasn’t using and the only way to remedy that would be to add more muscle mass to the job of propulsion.
So the question was what type of arm motion should I use? 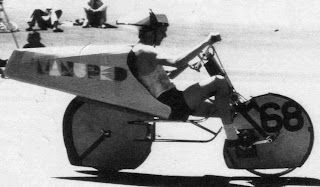 There was an arm and leg cranked recumbent from the mid 1970s called the Manuped, invented by John Carl Thomas. It had leg cranks passing through the front wheel and hand cranks mounted on a fork above that wheel. The entire assembly pivoted to steer, and the seat and rear wheel comprised the rear portion of the frame. That’s Fred Tach (sp.?) riding a Manuped during the 1978 International Human Powered Speed Championships. I talked to Gary Hale who was riding a Manuped at the 1990 Speed Championships in Portland. Gary had made some of the frames for the Manupeds. When I asked him about the bike, he confided that it was very difficult to ride because of the arm and leg force inputs perturbing the steering. So I had a reason to not use the hand-crank-and-steer approach.
If one wants to avoid the differential force application of propelling and steering the alternative to hand cranking is a rowing motion. While rowing does not make as good of use of the legs as cycling, it involves the muscle mass of the back in addition to the arms. The decision was made to use a rowing motion for the arms and conventional pedaling for the legs. The two motions were not at all incompatible and worked quite well. 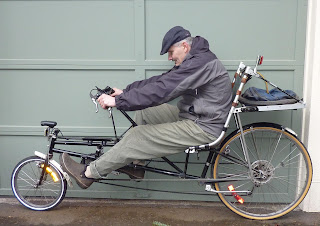 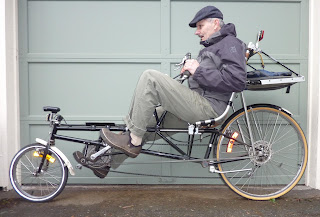 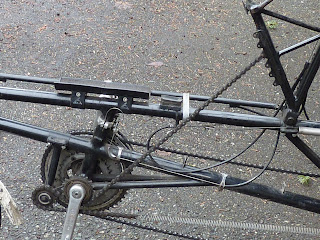 The basic approach is to have a rowing frame that pivots at the recumbent’s top tube and during its rotation pull a chain over a 16-tooth single-speed freewheel  attached to the left crank arm. The chain must pass under the freewheel to move the cranks in the correct direction, and therefore an idler is required to route the chain backward where it is kept taut by a screen-door spring attached to the bike frame. 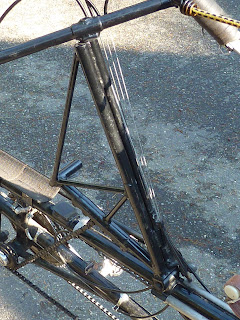 The handlebars are pivotally mounted within the rowing frame and the steering axis is perpendicular to the  rowing axis. The lever length of the rowing frame is 18.5” and it can rotate through 90deg. 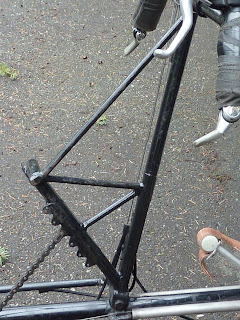 The lever length for the drive chain attachment is adjustable from 3.5” to 8” in six, 0.9” increments. The chain is attached to the rowing frame by an old-style master link so it can be easily moved from one position to another. To determine the most-natural feeling position, I started riding down the street at 3.5”. After about 100’, I stopped because that was too easy and moved it to 4.4”. I rode about a quarter mile and moved it to 5.3”. By the time I was a mile away from home I was moving it back and forth between the 6.2” and 7.1”. I settled on the 6.2” position.  The resulting arm to leg motion during the power stroke (pulling the rowing lever from its most forward to most rearward position) equates to slightly less than one pedal rotation. Since the return stroke is faster than the power stroke, two pedal strokes are approximately equal to about 1.5 arm strokes.
Since less than 150 Avatars were build (mine is #085) I wanted to preserve its value, so the arm-power mechanism and the idler clamp around the frame tubes. The arm power mechanism includes a diagonal brace to stiffen the top tube against the bending moment imposed by the rowing. This approach could easily be adapted to any recumbent with the only major modification being the mounting of a single-speed freewheel on the left-hand-crank arm. 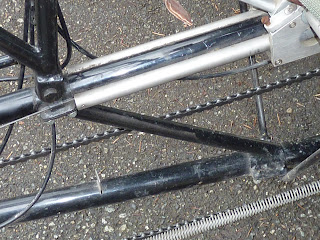 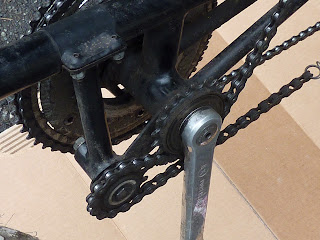 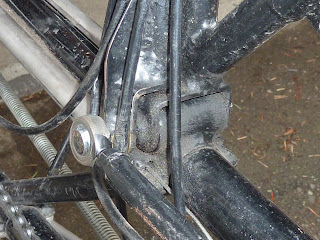 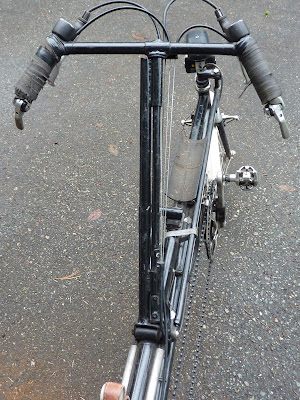 Cable routing details, at handlebars and at the steering knuckle. 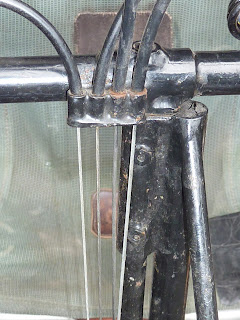 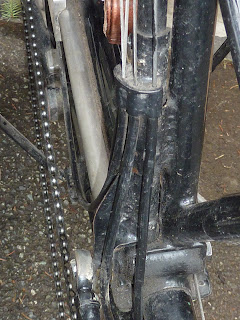 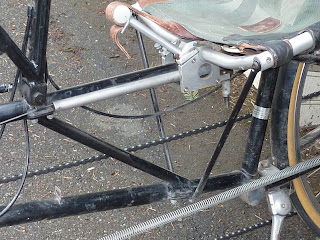 My seat was getting a bit wobbly so I took the opportunity to attach struts between the lower end of the diagonal brace and the ends of the seat tubes. I did loose seat adjustability by doing this.

The only downside I can see with this approach is the added weight, added friction and the loss of the under-seat steering which I find so comfortable. On the upside the speed is significantly improved, especially on hills and it makes the bike a lot more fun to ride. It is especially fun to race along next to someone without using the arm power and then kick it in. You should see their faces! And because of the front wheel is lightly loaded, rapid application of rowing power has resulted in wheelies on a number of occasions; quite unheard of for a recumbent bicycle!
Hephaestus 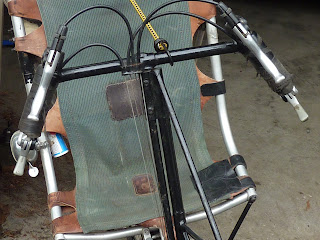 Posted by Hephaestus at 5:53 PM