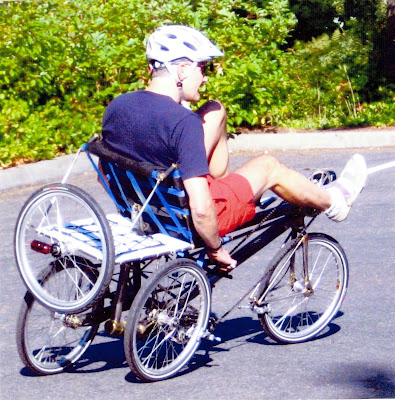 Compared to their four-wheel cousins, you see very few three wheel automobiles. I think that the basic reason for this is that, for layouts where all three wheels are equally loaded, and the vehicle tracks (width over the paired wheels) are the same, quad wheelers can corner at a 50% higher accelerations than trikes. Thus trikes need to be about 50% wider than quad wheelers for comparable tipping resistance.

So let’s look at a hypothetical pedal-powered commuter vehicle with electric assist. We make it a three-wheeler to take advantage of the reduced vehicle regulations. We want car-type seating with pedals about 10” below the seat, so we choose the tadpole layout. The pedals easily fit between the two front wheels.

We want a rollover resistance of at least one gee. The rollover gee limit for static vehicles is approx.

Where w is the track width (distance between paired wheels) and hcg is the height of the center-of-gravity off the ground. For tricycles, where the weight is equally distributed over the three wheels, w is approx. 2/3 the spacing between the wheels.

Automobiles regularly have rollover resistances in excess of one gee. And some sports cars can approach two gees or more.

For the one gee roll over resistance and a hcg of 16", we will need a track of about 48".
.
Both the Elf from Organic Transit and the Velocar from VeloMetro are actual examples of our hypothetical tricycle layout vehicle. Not surprisingly, they both have tracks of 48"

The Elf is shown below. 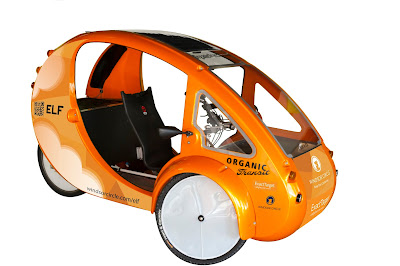 The proof-of-concept for the Velocar is shown below. 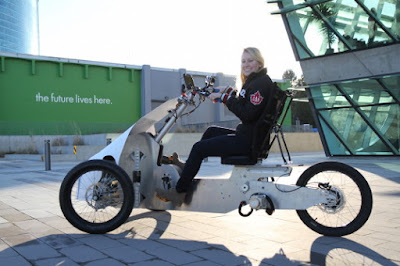 Does the rollover resistance need to be as large as one gee? Judge for yourself. The vehicle below is a Mango velomobile,  one of the better designed tadpole trikes. The vehicle width is 30” and I estimate the track to be about 28”. If hcg is 13”, Gees= approx. 0.7. Clearly in the case below it is not high enough for the turn that is attempted. And the turkey isn’t even wearing a helmet…

If a track of 48” is too wide for the paths the vehicle is to use, there is an unconventional trike layout that can be employed. I call it the Coventry-trike layout in honor of James Starley’s Coventry Rotary tricycle of the 1880s. 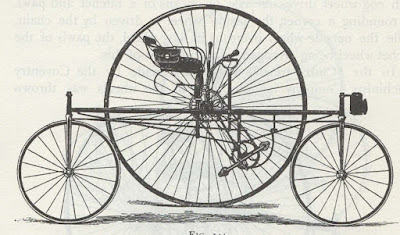 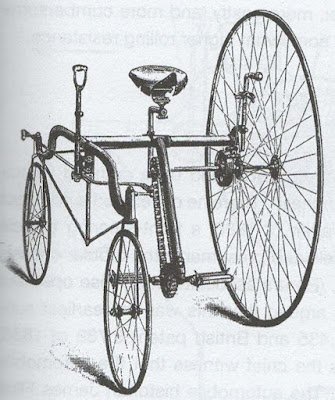 A modern version of the design would probably use equal sized wheels, all cantilevered for ease of removal and tire replacement.  One advantage of this approach is that, if the drive wheel is located along the c.g. in the side-to-side direction, 50% of the vehicle weight in on the drive wheel as opposed to the conventional tadpole layout which only has about 33%.

One downside of this layout is that the trike would tip forward during hard braking. Tipping could be prevented, however, by having a caster near the ground opposite the front steering wheel and in front of the driving wheel. This caster could be frictionally loaded so when the trike tipped forward and the castor contacted the ground it contributed to braking.

The most complicated method of reducing the width of the trike, but maintaining its rollover resistance is to allow it to lean. The designers at VeloMetro considered making their Velocar a leaning trike, but since their business model was to rent their trikes to people for short trips, the associated learning curve would have been impractical. Leaning trikes have all the issues of recumbent bicycles, plus more if the vehicle is in and enclosed body. See below,

For bicycles and free-leaning trikes,

Where alpha is the lean angle from vertical. For one gee of rollover resistance the lean angle is 45deg, which is quite a bit of leaning, and is to the state when the tire contact with the ground could be on the sidewalls, not the best for adhesion.

If properly implemented, however, leaning trikes can develop more rollover resistance than just the bicycle-lean effect.

Since I have spent a good deal of time working with the delta trike layout, let us examine another hypothetical vehicle. It has a width of 30” and a track of 26”, a wheelbase of 48” and a c.g. height of 24”. It can lean 30deg. from vertical.

Below are diagrams of this trike seen from the top and the back. The trike is fully leaned over. 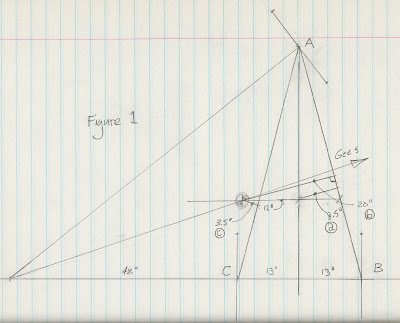 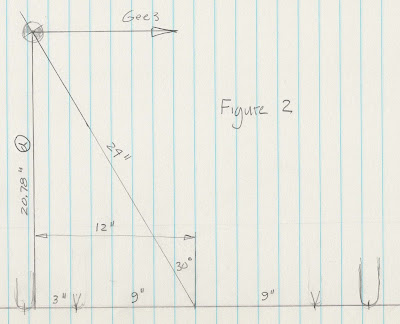 (Lean locks are discussed in more depth in the post above.)

The first acceleration is when the trike is locked (lean-locked) in its upright position. This upright–locked acceleration is 8.5” (dim a. in figure 1. from the upright c.g. to the tipping line A-B) divided by 24” (the c.g. height) or .35gees.

The last acceleration is associated with the tendency of the trike in the leaned-over but lean-locked state to tip in the opposite direction. This counter-tipping acceleration is 3.5” (dim c in fig 1, the distance the c.g. overhangs the tipping line A-C) divided by 20.78 (dim d in figure 2) or .17 gees.
Sounds confusing, doesn’t it.

To try and make things clearer, let’s have our rider, from the Mango tipping video above, ride our trike through a progressively tightening turn. The rider gets into the delta trike with leaning locked upright. The rider begins to make a turn. When the acceleration of the turn reaches .35 gees, the lean lock must be released to prevent tipping. The turn gets tighter and the rider leans into the turn. As the turn gets to .58 gees the rider is at the lean limit. If the turn gets tighter the rider will not be able to maintain the lean and will be pulled upright. However, if the lean lock is again engaged at maximum lean, the rider can corner with an extra .38 gees without tipping.

Now even though the trike is locked up with the c.g. outboard of the left tip line (A-C) the trike won’t tip over as long as the turn is at least .17 gees, the counter-tipping acceleration. The acceleration of the turn must drop from the .96 gee max to .17 gees before the lean-lock needs to be released and free leaning can resume. This is plenty of time to do this.

The requirement to continually engage and disengage the lean lock may be too much of a complication for a human-powered commuter vehicle. But for powered vehicles that can employ automatic lean actuators based on vehicle accelerations, this would all be transparent to the user. The driver would just steer and the onboard computer would determine the appropriate amount of lean.

Hephaestus
Posted by Hephaestus at 5:28 PM