Those of you that have followed my blog at all know my opinion on what constitutes an optimal ped-electric commuter vehicle.

1. The vehicle should have three wheels for stability on slippery surfaces.
2. It should place the rider's head at the height of a typical automobile.
3. It should be narrow enough to comfortably fit in a bike lane. I can be more specific on this. It should fit between barriers spaced 36" apart, so assume a maximal width of 34".
4. It should not overturn when cornering. Assume a tipping resistance of 1 gee.
4. It should be enclosed to protect the rider from the elements.
5. And for traction on slippery surfaces, it should drive two wheels.

Now if the vehicle is a static tricycle point 2 and 3 are at odds with each other. High enough rider and wide enough to not tip over in turns results in a vehicle that has a width of about 48".

The solution to this contradiction is a leaning tricycle.

When correctly designed, leaning trikes can be balanced just like bicycles. Like bicycles, the most difficult task is getting started from a stop. One has to develop balancing speed often with one pedal thrust to avoid tipping over or having to put a foot down and start again.

Problems appear when the leaning trike is enclose in a body that interferes with the action of starting.
To remedy this potential problem the vehicle need a mechanism to lock-up the leaning for starting, and stopping. The locked-up mode could also be used in slippery conditions when balancing is not practical. You now have two modes of operation, balancing and being stable. The rider has to switch modes and decide when to do so.

Refer to the Velotilt design where the leaning needs to be locked up when the rider gets into the vehicle and starts moving or when the vehicle is stopping.

I discussed the problems I had starting and stopping my EcoVia trike in the post below.

When a fellow HPV-er tried to ride the EcoVia he pointed out the average rider would have trouble mentally switching from one mode to the other. I could not disagree, having once forgotten that I was in the balancing mode and thinking I was in the static mode. This resulted in a swerve that may have ended my HPV career had there been any other cars near me at the time.

So how to address this problem?

I believe you must have the static mode for starting, stopping and slippery conditions. The balancing mode is the most problematic so eliminate that. Since you still need to lean the trike to prevent tipping over in corners, make it controlled by the rider by means other than balancing.

Now since accelerometers, controllers and stepper motors are inexpensive, the logical approach for controlling lean for an electric vehicle is computer control, with it being transparent to the rider. Since lean angle is a function of radial acceleration, which in turn is a function of steering angle and vehicle speed, the necessary calculations are relatively simple.

GM's Lean Machine from the 1980's used foot pedals, since the vehicle as gas-powered. 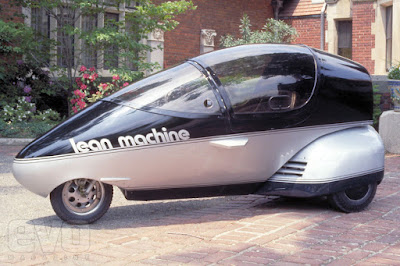 A human-powered vehicle more likely than not uses foot pedals for propulsion, so that is not an option.

One could combine lean control and steering into one action. I tried that with the first version of the EcoVia, but the approach introduced bump-steer with disastrous consequences. 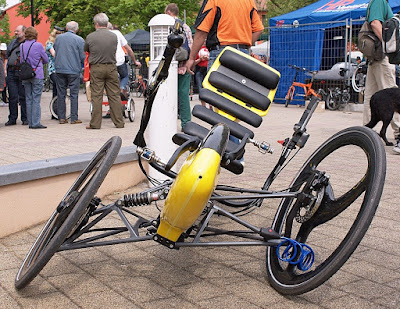 Dual control could be used without requiring continuous lean adjustment. For example, the MK3 version of my EcoVia has a c.g. height of approx. 23 in. an a track of 30". This allows for a .43 gee turn without needing to lean. 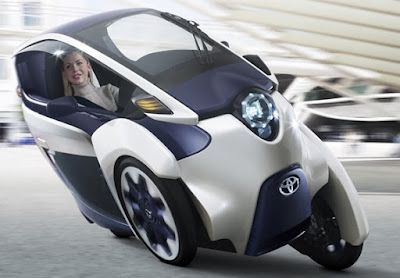 One can calculate the required geometry for a fixed lean that can resist one gee just at the limit of tipping over.

For a vehicle that leans by having its wheels move essentially vertically, staying parallel to the vehicle, like the Toyota iRoad above, the relations below apply: 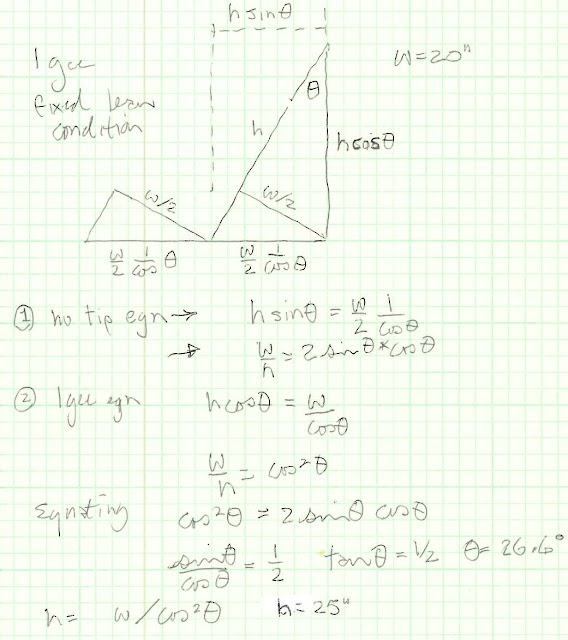 Interestingly, the lean angle for this condition is not a function of w (track) or h (cg height). It ends up being 26.6deg. Not surprisingly,  The lean angle of the iRoad is about 26deg. And the iRoad width is about 34"

Let us compare the gee limits for several configurations with this geometry.

Clearly, for a given track width, a tricycle with controlled leaning gives the greatest resistance to tipping.

So our optimal all-weather ped-electric trike will have controlled leaning where the leaning is determined by computer.

What about the wheel layout? Should it be a delta trike or a tadpole trike. Due to drive-train complexity I will eliminate the tadpole configuration where the front wheels drive and steer. That means that if the two front wheels drive, the single rear-wheel steers. (Like the iRoad).

Below is the EcoVia Mk3. The long lever controls the leaning while steering is located below the seat. 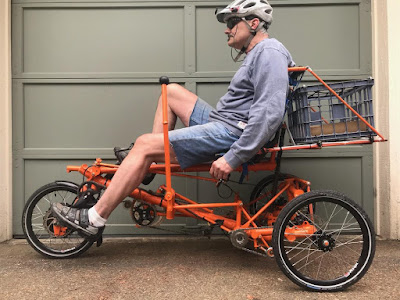 The biggest advantage of the delta configuration is the pedals can overlapped with the front wheel to produce a very short vehicle. The vehicle can be lighter weight because the structure supporting the front wheel can also support the pedals. Along with these advantages comes three disadvantages. The steering lock is limited. Not enough to be a problem for normal turns but enough to prevent tight turns. Only one wheel is available up front for braking where the load is transferred to during hard braking. Lastly, the steered wheel is the first wheel to encounter obstacles like railroad tracks. The obstacles can perturb the steering and unexpectedly change vehicle direction.

Below is the EcoVia Mk1 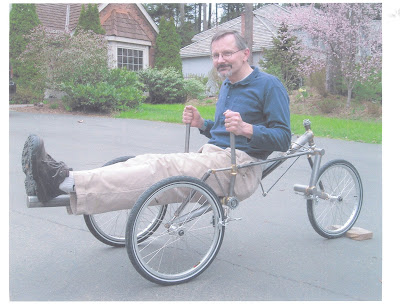 The biggest advantage of the tadpole configuration is it doesn't suffer from the three issues plaguing the delta configuration. On the other hand, the package is longer that the delta configuration because the pedals are on one end and the steered wheel is on the other. The space between the seat and the rear wheel could be used as a trunk. And there is the issue with rear-wheel steering. Since the controlled leaning approach does not involve balancing, this should not be a show-stopper. After several communications with Jim Kor of Urbee fame, he described his approach to make his rear steering stable. The Urbee without body is shown below. 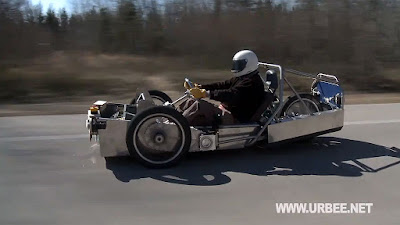 I believe despite its problems, the tadpole configuration wins out.

Below is a drawing and photo of the Cyclodyne, a tadpole trike from the early 1980s that was capable of cruising at over 30mph. The Cyclodyne, of all the commercial human powered vehicles, came the closest to harnessing the potential of human power as a transportation alternative. 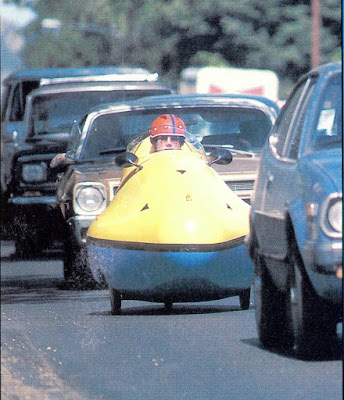 Had it been made a quad by adding a fourth wheel, the width could have been reduced to the target 34" and speed would have been increased as well, making it a very practical commuter vehicle. But the fourth wheel would prevent it from being considered an electric bike if a motor was added.
Adding controlled leaning could have reduced the vehicle width, increased visibility by raising the rider's head height and allowed it to be electrified. An optimal all-weather tricycle configuration.

Even though it only exists as a few equations and a few crude sketches, I have a need to give a name to this all-weather, ped-electric, fixed-leaning, front-driving, rear-steering tricycle. I will call it the Aerion. (Aerion is also the name of an aviation company developing a supersonic business jet).

I have a bias for the Toyota iRoad. My first configuration in 1990 for the EcoVia was a front-driven, rear-steered leaning configuration. I was not using controlled leaning but was balancing the vehicle and I could not make the rear-steering stable. More than two decades later, electronic controls allow the iRoad to do what I couldn't and reap the benefits of an optimal configuration. 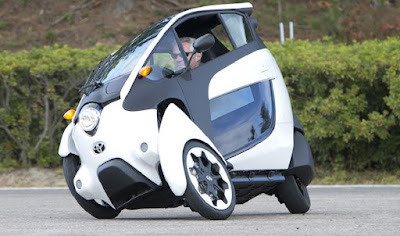