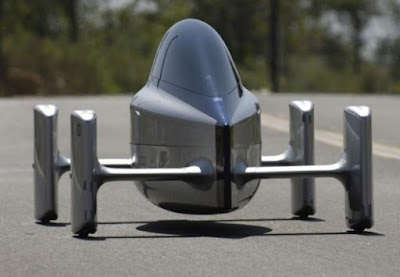 From the previous post, we concluded that the Podbike, with a few refinements, was an environmentally responsible vehicle for a single individual to take short trips using pedal and battery power. The problem was that having four wheels, if did not constitute an e-bike in the US and Canada.

If we were to convert the design to static three wheeler and maintain the roll-over resistance, ROR, the width would have to increase by 50%, making the trike too wide to share the road with autos of share a bikeway with other cyclists. And converting the design to a leaning trike would increase the cost and complexity.

So, can we eliminate the electric assist and match the top speed of a Class 3 e-bike, 28mph? Since extremely streamlines recumbent bikes have covered a flying 200m at over 90mph and were ridden over 57 miles on a track in an hour, this should be very doable.

Let's take another look at my all-time favorite all-weather, pedal-powered commuter vehicle, the Pedicar. It was designed by two aerospace engineers, Robert Bundshuh and Lionel Martin and produced in 1973. The Pedicar is discussed in detail in "Pedicar Technology" in a previous post. 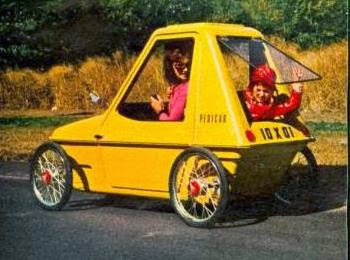 Several factors prevented the Pedicar from becoming popular. Only 20 vehicles were produced. At $550, it was expensive compared to an average bicycle and had a top speed of only about 18mph.

How would one make the Pedicar more efficient so your average cyclist could pedal comfortably at 28mph?

The main speed limiter was the drivetrain followed by the aerodynamics.

The Pedicar had a linear-motion constant-treadle pedal drive (see " Lure of the Linear Pedal Drive" in a previous post) connected to a 5-speed transmission. Bundshuh incorrectly assumed that the constant treadle would produce a 50% power increase over circular pedaling. It could produce a 50% torque increase, but the deadspots at the extremes of the pedal stroke prevented even rotary-pedaling power levels from being realized. The pedals were not coupled together and that prevented a smooth pedaling stroke. One benefit of the linear pedal stroke was the nose of the Pedicar was lower than it would have been with circular pedaling. This resulted in a very unobstructed view of the road ahead of the vehicle.

Possibly an even bigger problem was the transmission. It had five speeds and allowed a range of 1:6.8, but the step size was 60%. The size of the steps never allowed the rider to get in a comfortable gear. A derailleur system has significantly smaller steps and combined with a rotary crank was considerably lighter. The weight of the Pedicar as 125lb. So some weight reduction is in order.

So we could replace the Pedicar transmission with a 1x12 mountain-bike drive that has a ratio of 1:5.6 and a step size of 17%. To minimize the swept pedal volume at the nose of the vehicle we could use 160 to 165mm cranks with a bottom bracket having a low "Q" factor.

The other area for improvement is the aerodynamics.

The exposed wheels are the biggest problem. The top of the tire is entering  the airstream at twice the speed of the vehicle. So the airdrag of that tire is 4X the drag of a tire that is not rotating. The solution is to enclose each wheel in what the aviation world calls a wheel pant.

A place to look for ideas for streamlining a single-person, four-wheel vehicle is Extreme Gravity Racing.

Many of the racers use a bod-pod + wheel-pod approach for their layouts. Even though the drag coefficient, Cd, is larger than if the driver and wheels were enclosed in a single body, the cross-sectional area is significantly lower and the product of Cd*A is low enough to  produce a noticeably more streamlined vehicle.

The picture at the beginning of the post is a corporate entry gravity racer from General Motors. Now the picture is deceptive because the GM car is very low and the wheels are only 12" in diameter. 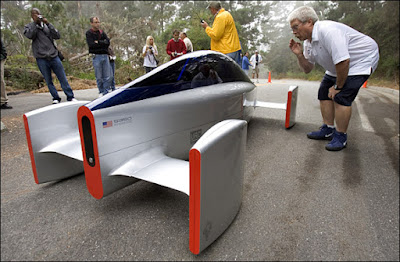 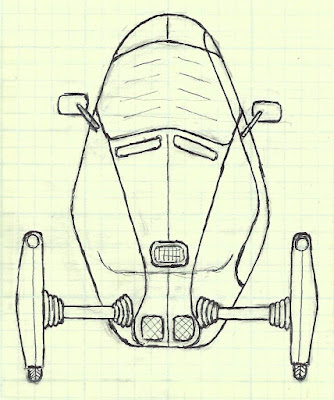 Now there is an interesting consequence of having our all-weather commuter vehicle use four wheels. In a previous post, "Pedaling Along the Skyway", I talk about elevated bikeways. If these bikeways use wheel tracks to simplify construction, then a four-wheeler only requires two wheel-tracks.
Another consequence is that the tracks could supply electric power to the vehicle. The vehicle could incorporate an electric motor to drive the rear wheels but it wouldn't include a battery. Thus, when not on the bikeway, it would not be an e-bike. It would be an e-bike only when is is using the electricity from the bikeway. Getting to and from the bikeway would only be on pedal power. This approach should allow the quad to use regular bike ways and streets like conventional bikes and trikes.
Hephaestus

Posted by Hephaestus at 9:46 AM